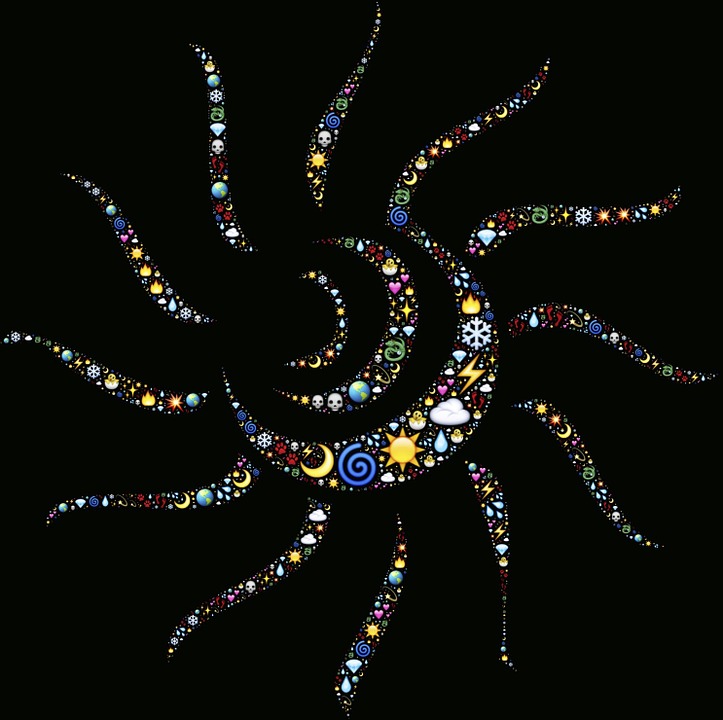 2016 started as the year of change, and change continues to impact our lives with each passing day.

Release is a major theme this year. The upcoming Solar eclipse on March 8-9 is yet another push of the Masculine towards experiencing itself within the safe, loving boundaries of the Feminine. It will begin over the Indian Ocean, then darken sections of Sumatra, Borneo, Sulawesi and other islands before diminishing out in the Pacific Ocean northeast of Hawaii.

Father Sun and Sister Moon will enter into a sacred dance during the Solar Eclipse and end their journey with the Lunar Eclipse on March 23rd, just past the major shift in Spring, on the 21st. of March.

For many, a major life shift began during Winter Solstice, December 21, 2015.

We began to awaken to a strong force, precipitated by the End of the Mayan Calendar in 2012, where Consciousness made the final ascent into Goddess energy. The Mayans poignantly understood this as an end of an era. Anytime Consciousness shifts from the Masculine to the Feminine, as it does in cycles, time stands still…and we experience the Void.

We’ve been taught to fear the Void. What is it? It is a place or time (neither of which exist except in our attempt to understand moving energy) when Consciousness falls into Itself; and experiences Nothing and Everything at once, it is Peace and Love at its fullest expression.

Now this is new to me, this information, but my guides insist that we have simply forgotten what the Void feels like and because we are living in this dense physical body, the Void instead of feeling like the most intense orgasm you can imagine with Love coursing rapidly through all our chakras and emanating powerfully out of the Crown Chakra and Third Eye simultaneously, instead feels like Chaos.

And that explains why we feel like we are opened to something so forceful that it threatens to eat us up.

The truth is, many people have shifted to embody higher frequencies in the last three years. We did so willingly, knowing at soul level that this shift was necessary to hold Divine energy in the physical realm, and that it would seem uncomfortable at times.

While some have been emanating these frequencies and thriving, life for others became unbearable and a surge of cancer, natural disasters and epidemic rates of war became the exit points for all those who wished to witness the healing of Earth from another dimension.

What we viewed as death in stunning numbers, is simply a shifting of perspectives, death is merely a shedding of skin, like the Serpent/Kundalini who continues to rise as we open to Love.

The eclipse will herald more exodus points, and I mention this only to point out that those who wish to leave, have work to do from that Other Side, and we must release them with Compassion and Gratitude.

Adjusting to higher dimensions and frequencies comes with a call to express ourselves.

It is very important to use the time between the eclipses as the portal that it is towards creativity.

You came here to express yourself. When a human life resists its own creativity, that is to say, its inherent nature as Creator, the psyche slips into fear, separation and a tendency towards non-self-forgiveness. Now, when we don’t forgive ourselves, we in effect put ourselves into a prison to which only we have the key.

You are not here to survive, you are here to create!

Creation is the whole impetus of the Universe, it is in constant forward movement towards creation and re-creation. Human life hangs on the ability to tap into that life-giving force. Turn your heart away from your purpose and life quickly becomes nonsensical.

In the next few days, take time to open to who you really are. And that is not Fred, who drives a Corolla and works at the bank. Fred does not really exist, Fred is an illusion…what is real is the creative spark that emanates the form of Fred. Everything that Fred remembers as his authentic self, is the real Fred.

When Fred recognizes his own creative essence, he then becomes real, and the illusion is dropped.

That ache in your heart, that quickening of your soul – that is the call of authenticity.

You’ve been wanting to know yourself, to understand what drives you, what direction to take, what to leave behind and what to keep…you can only do this by entering the Void, where you know nothing and everything at once.

A scary place, because it feels like Chaos but is really All That Is – Love.

One act of creativity on your part can facilitate the shift to the higher frequency your soul is seeking. My guides gave some examples and I had to laugh because they seem so simple, how could they mean so much? But it’s not really the act, it’s what the act represents, and what it initiates – the opening of the portal.

You may open by discovering a new sacred stone that touches your imagination, you may give birth to a new project, decide to become pregnant (you have no idea who you are bringing into the world, or what their contributions will be), do some coloring, knit something, bake a cake -it’s all about expression of self.

Self-expression is a shifting point to your Divinity, that is why it feels so good, why we Pin things, why we re-decorate, why we play sports. Again, feels so mundane, but that rush you feel is your frequency accelerating. You are Creating; remembering yourself as Creator.

The internet is another portal to our creativity, and also something much more – when we communicate via the internet, we are tapping into the One Mind. We now have a rudimentary tool for connecting to the Matrix of Life. So don’t be surprised at how your children are already born ‘knowing’ how to operate a computer, they are the new humans, even their DNA is different than yours, and they come pre-equipped to deal with the New Earth.

The internet, I think, is a precursor to us becoming Telepathic once more…it is difficult to hide anything on the internet, and so it is with telepathy, where all is known from one mind to another.

You might think that you are not magic, but you are. Everything begins and ends with you. Forget the separateness we think we are, because there are so many billions of humans, but there is truly only one of us.

Take time every day to experience yourself as Creator through acts of your own creativity and be the source of change on the planet.

When you do so, you affect everything. Because you are everything and with you begins the wave that washes away the fear, pain, war, and separation we have felt for so long.

Be present to yourself. Eclipse your old self and shine brighter than ever before.

You may think that you need this or that, but you need nothing to begin the shift that Consciousness desires to express. It cannot express itself on this planet without you, because it is you.

What role does Pisces play in the scheme of things? Pisces is the ultimate Creator, many Pisceans are drawn to the Arts, because they must express themselves.

Pisces does not always seem very practical, but it does not bother itself with this, because the need to fulfill their hearts longing is paramount.

Now is not the time for practicalities, my loves, now is the time to enter your visions.

The next three weeks is the adjustment period to the higher frequencies that our Mother Earth will be experiencing. Should you join the Divine Feminine as she cradles the exiting masculine energies for this next 26,000 year cycle, you will find yourself on a new trajectory, a new emanation of Divine Love.

Let us dance together, into the Mystic. Happy Eclipsing!

Want to manifest powerfully? Wait. Embrace stillness. We rush to plant our dream seeds, but is the soil right? Dark Crone Moon is for banishments and releases. Don't rush the magic. Working with the correct energies offers potent manifesting results. #darkmoon #cronemoon #stillness #magick #pagan #witch #wildwoman #womenwhorunwiththewolves #shakti #soulalchemy #luna #moongoddess #astrology #asabovesobelow #manifestingabundance #monikacarless #indieauthor #Intuitivecoach #wordwitch #thedarkpooltrilogy
Too magical? Too mystical? Too wild? Too sensual? Too uncensored? Too erotic? Too steeped in the unconventional? . . 🐾 Perfect! You're doing great. . . 🌑 See yesterday's post while you're here for Dark Moon wisdom. . . 🌸 Intuitive coaching for the wild soul @monikacarless.com Art: #brianfroud #unconventionallyminded #wildwoman #sherises #divinefeminine #wildtribe #moongoddess #authenticity #liveyourbestlife #mystic #pagan #witch #magick #monikacarless #indieauthor #Intuitivecoach #wordwitch #thedarkpooltrilogy
Something that I have become very passionate about teaching, is our inter-connectedness with the natural world. We are cyclical hu-beings, waning and waxing through phases and seasons just like the moon and our mother Gaia. When we follow these cycles as demonstrated for us by nature, we are in tune, in sync, in balance. Balance allows us to live whole-istically, and to embrace the ups and downs of natural life, with grace and love. I encourage you to, like Luna, enjoy two days of sacred pause, to descend into the deepest most delicious rest, while shoring up your most potent magic to be be released at new moon, two days hence. . . #darkmoon #newmoon #astrology #ritual #sacredwisdom #crone #potentmagic #pagan #wildwoman #witch #wildtribe #wildwoman #magick #monikacarless #indieauthor #witch #moongoddess #moonmagick #priestess #thedarkpooltrilogy #maidenmothercrone #femininecoach #embodiment
02.20.2020 The High Priestess She rises from the ashes of her insecurities, all woman, all courage, all magic. She is a mist, a whimsy, a mystery of words and images, she will weave and dance until you are freebasing her energy like an intoxicating wind. Surrender. She is no longer the woman you have known. She is Stardust Woman, healer of your wounds. . . 🐾Inuitive coaching for the wild, sovereign woman @ monikacarless.com . . image: @fotosym #02.20.2020 #highpriestess #numerology #creatress #mystic #pagan #wildwoman #witch #monikacarless #indieauthor #Intuitivecoach #thedarkpooltrilogy #magick #wordwitch #femininecoach #embodiment